City bikes in the fight against “the last mile” 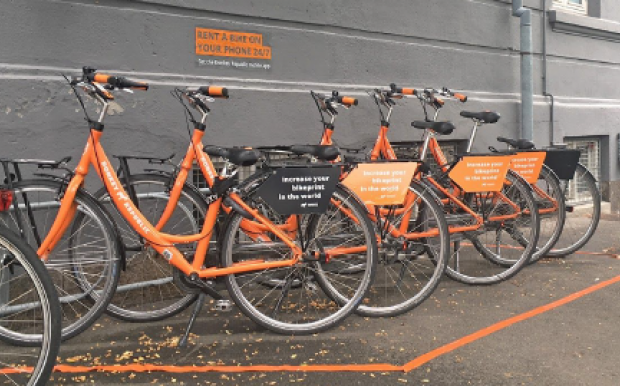 A new pilot project with city bikes should make it more attractive to leave the car and take the train to and from work for some of the 25,000 commuters who work or study in Lautrupgård, Ballerup’s largest business and industrial area. If the project succeeds, there is great potential to spread it to other metropolitan areas of business.

“The last mile” is the English term for the challenge of walking the last stretch from a train or bus station to your destination. Studies show that the typical commuter is willing to walk about 400 meters and, despite otherwise well-developed public transport, this is a challenge in many commercial and industrial areas. But if you hop on a bike, you can reach one-and-a-half kilometers in the same amount of time. It is with this knowledge that a new collaboration between Ballerup Municipality and the city bike company Donkey Republic has been established to work against “the last mile”:

“We have been out talking to many of the companies, and particular at the northern end of Lautrupgård, they think there is a little too much distance to walk to the buses,” explains Tina Wexøe Ertbjerg, Traffic Planner at Ballerup Municipality. These conversations then developed into dialogue with Donkey Republic, which has initially set up 10 bikes at the train station and another five at a nearby bus stop.

A focus on being business-friendly

For Ballerup Municipality it’s about reducing traffic congestion, particularly at the nearby – and infamous – “Chocolate Cross”, which often causes traffic problems, so for that reason Lautrupgård is an extremely relevant location. But it’s also about strengthening Ballerup as a business-friendly municipality:

“Of course, we make it more attractive to travel in a group, but it is also a matter of making the municipality’s business area more attractive, so companies have the best opportunities to recruit the employees they need,” says Tina Wexøe Ertbjerg. She emphasizes that it is largely about creating flexibility for employees in the area:

“Those who travel by S-train can, in principle, take the bus for free. But if you’re late, you can hop on a bike instead of waiting for the bus. At the same time, studies show that every 10th person that alights at Malmparken Station brings a bicycle with them. So the idea is to also offer them an alternative to taking the bike every day,” says Tina Wexøe Ertbjerg. She says that Donkey Republic is ready with more bikes if necessary:

“The success criteria are that the bikes are being used but, at the same time, there is a bike there when you need it. So we’ve started with the 15 bikes and we’re ready to get more if necessary. But, of course, there is also a limit to how many bicycles there is room for.”

The experiment will initially run for six months, after which time feedback on the experience will be collected and the possibilities for establishing a permanent solution will be explored. During the trial period it costs 10 DKK to rent a bike for up to 12 hours. Alternatively, you can have a monthly subscription for 100 DKK, which gives free access to borrow a bike for up to 12 hours at a time.

Moving People sponsors seven of the bikes, while Donkey Republic is responsible for setup and operations. The companies in the area also have the opportunity to sponsor a bike, which means having their name and logo on it.